I am enjoying a trip to Norway with my parents and their friends, mainly to visit the so well-known majestic Fjords. What makes this trip so exciting is that we’re doing a road trip by car with these local friends, so for once, I have no idea of what I’ll be seeing in the next hour!

On our first day we just visited the city of Oslo, capital of Norway and one of the cities with best quality of life in Europe but also with one of the highest cost of living in the world. Our friends live in the outskirts, but still within the city, in a building surrounded by greenery and mountains. We had a very authentic breakfast consisting of bread with salmon, shrimp, and lamb ham and salami. Delicious!

We started off by visiting the Vigeland Park, the world’s largest sculpture park made by a single artist (Gustav Vigeland). The park, built from 1939 to 1949, is an open-air and entry-free museum showcasing more than 200 sculptures in bronze, granite and iron. The sculptures are mostly humans of both genders and many ages, usually interacting between each other.

The park was beautifully layered, with a big Monolith overlooking a big fountain and a long promenade with sculptures on each side, and with a round sculpture titled the Wheel of Life behind.

There was also a very serene and beautiful cemetery right next to the back gate of the Park.   Cemeteries here are very integrated with nature, and quite different from Spain. The tomb consists mainly on a headstone with the inscription of the people resting underneath, and a small piece of land where the family plants some flowers. This way, instead of bringing new flowers in each visit and seeing the previous flowers wither, there will always be fresh flowers. Most cemeteries are located next to a church, so I’m not sure if the church helps watering the plants or if the natural rain is enough to keep these flowers alive and well. 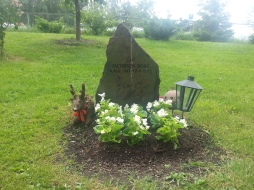 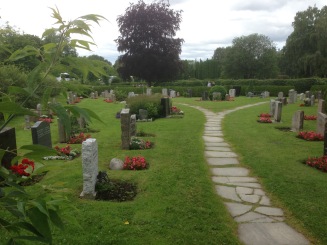 Next, we drove to the city centre and visited the City Hall, the Rådhuset, which hosts the Nobel prize ceremony every year on December 10th. The building itself is quite impressive, full of fresco paintings on the walls and ceilings. Entrance is free and there are tours during the summer season. 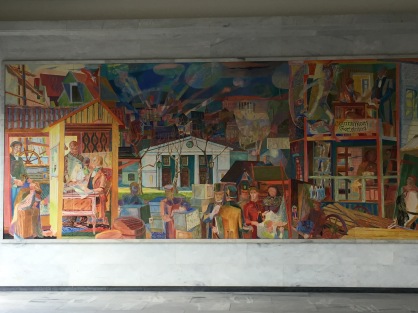 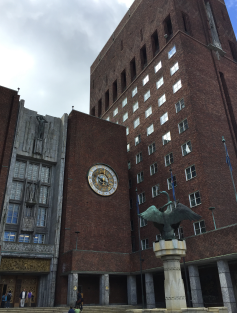 The Royal Palace, where the Norwegian Monarchy resides,  is about 10 minutes away. Similarly to London, there is also a changing guard everyday at 1:30pm.

We had lunch in a very good Vietnamese restaurant called Dalat Cafe (yes, I know we were supposed to eat Norwegian food, and that was the plan, but we drove by a Vietnamese restaurant they know that is really legit and we had to stop by!). The fresh rolls were amazing, and so was the bunbohue, similar to the ones I tried in Ho Chih Minh (not very spicy), although the Pho lacked a bit of taste. This meal reminded me a lot of my trip to Vietnam last year, where we ate a lot of bunbohue and some pho~ the only thing I really dislike about Vietnamese food or Asian food in general, is that they tend to use a lot of MSG (we call it weijing in Chinese, and “Chinese salt” in Spanish), and it makes you really thirsty afterwards! 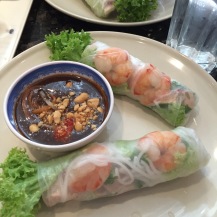 The Akershus Fortress was a medieval castle built to defend Oslo, and it overlooks the sea. Currently, it is open for visits and hosts also the Norwegian Armed Forces museum and the Norway’s Resistance museum.

We were very lucky to see an outdoor sculpture exhibition by Laura Ford in the Fortress (June 11th~September 30th). The most beautiful ones were the three girls that at first seemed to be playing hide and seek, but later on we discovered that these girls were actually crying. 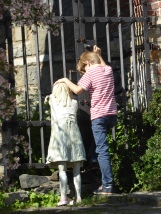 Other sculptures showed a crippled man holding bags, an elephant boy in pijama, a bird boy… all of them had one thing in common: no faces shown. I wonder why ^^ 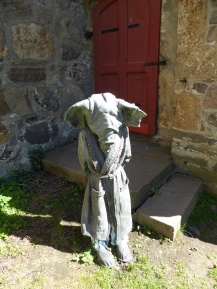 Lastly, we attended this season’s last Ballet performance by the Norwegian national ballet at the Opera house. The Opera house is a very modern-contemporary looking architecture, with angled exterior where you can walk your way up to the ceiling and chill. The cafeteria, although pricey, is also very nice with a cool terrace. 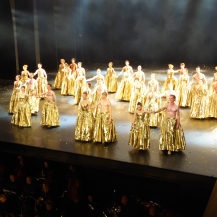 The performance was really great, with very talented dancers both female and male dancing different styles of ballet, from very classic movements to more humorous dances. This was my first time watching a professional ballet live, so I cannot compare it to others, but it looked very professional and entertaining, so I really enjoyed the experience despite having a strong headache at the time.

This was a long day full of activities, but it is very feasible to do all these things in the same day, as the city centre in Oslo is not that big. Weather in middle June was mild but quite sunny~!

Keep an eye for the next few posts, as we will be doing a road trip around Norway fjords area, I promise to post really amazing pictures and to talk about some hidden places!